I sewed some placemats... 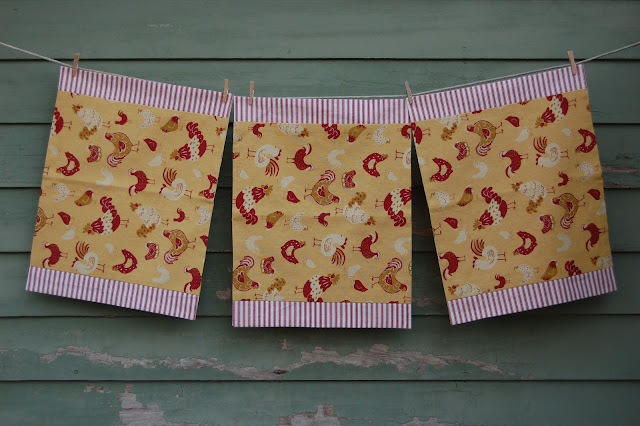 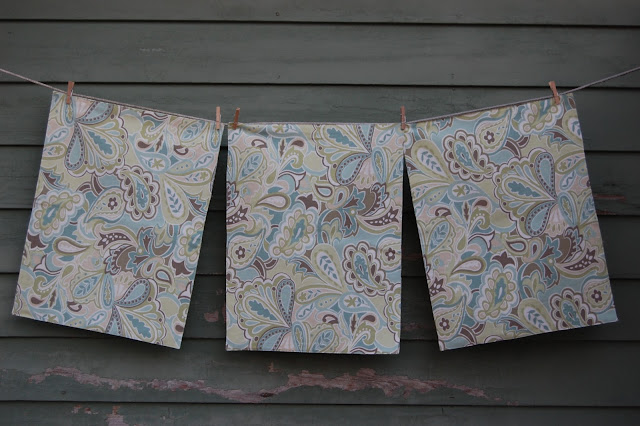 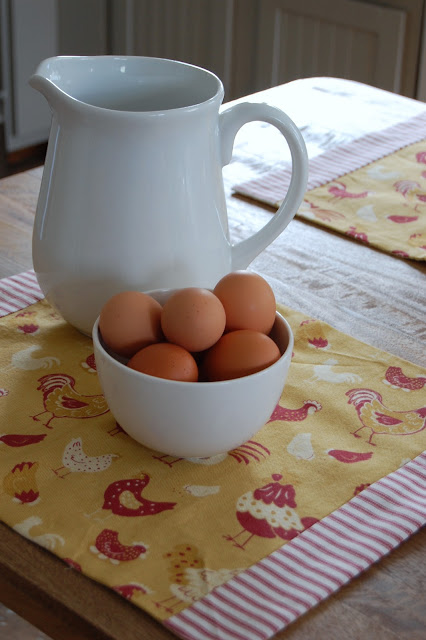 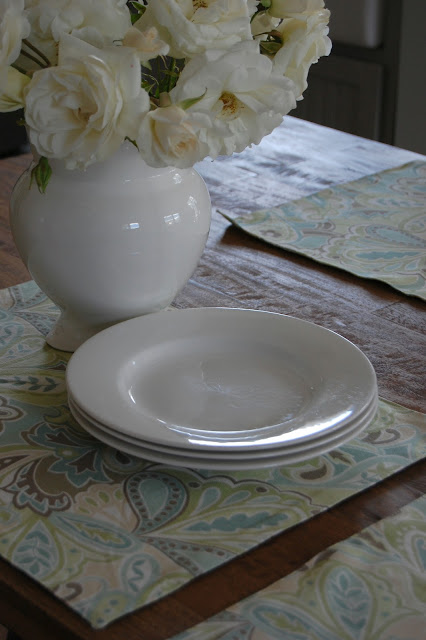 But none for dinner!
By the way, if you are interested in sewing your own placemats, it's really easy!  Check out this tutorial.  If you decide to sew some, let me know.  I'd love to see them!
Posted by Heather at 1:03 PM 19 comments

According to the web, a guilty pleasure is something one enjoys and considers pleasurable despite feeling guilt for enjoying it.
Well, Trader Joe's fleur de Sel Caramel is definitely one of my newest guilty pleasures... 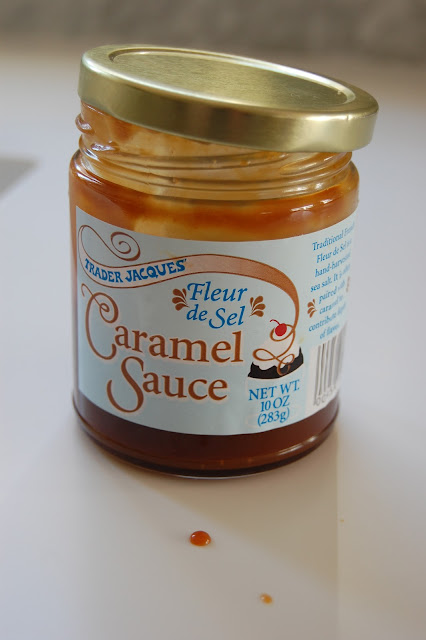 My mother, Adrienne, from La Vie Quotidienne﻿, first introduced this delectable sauce to me on New Year's Eve, and I've been addicted to it ever since.
It is delicious on a scoop of vanilla icecream...but if you decide to eat a spoonful of this delicious sauce straight from the jar, I won't tell anyone!  Not that I've ever done that!
So last night, along with my Trader Joe's caramel sauce, I indulged in my next guilty pleasure... watching Masterpiece Theater's "Downtown Abbey".

My oldest daughter introduced me to this British television period drama series, and I am hooked!  Every night I can hardly wait to watch an episode.  I'm almost done with Season 1 on Neflix and am recording Season 2.  The characters, the costumes, the stories, the scenery...I love it all!
Now that I've shared mine, what are some of your guilty  pleasures?
Posted by Heather at 1:36 PM 16 comments

Over the weekend, my wonderful MacGyver husband was able to install my brand new GE Cafe microwave and range.  I chose the GE Cafe for two reasons.  First, it has the look of a professional style range without the expensive price tag.  Secondly, the GE Cafe range has a baking drawer!  I would love double ovens, but there just isn't space in my small kitchen nor in the pocketbook! 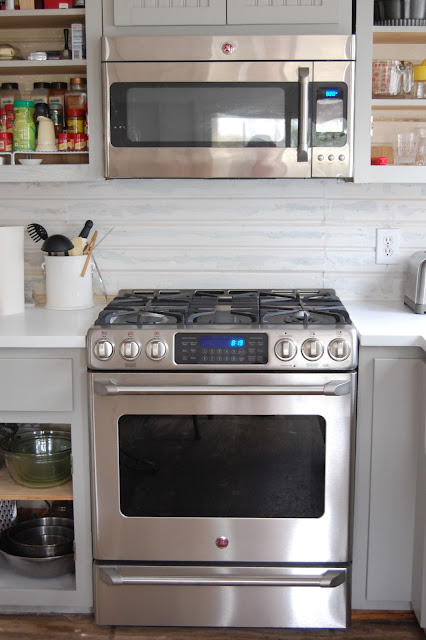 As you can see, we still haven't put on the cabinet doors just yet.   I ordered knobs and handles from Home Depot and am anxiously awaiting for them to arrive.    Also, I'm still trying to decide a backsplash.  Originally, I was going to put a piece of stainless behind the stovetop, but now I'm thinking of tiling all the way across.  Tile?  Don't ask what kind!  I'm not sure, but I'm leaning towards penny tile or perhaps marble.  You'll just have to wait and see!

It's been terribly hard to cook on the new range.  It works beautifully, but I want it to stay perfect!  I'm convinced that people who design showcase kitchens for hundreds of thousands of dollars don't cook in them!  Anyway, the hungry diners here at Love and Life at Leadora would never allow that, and as soon as the range was put in, they demanded cookies.  After much pressure, I finally broke down and baked espresso double-chocolate chunk cookies.  I'm not sure if it was the new oven or my outstanding baking, but MacGyver husband proclaimed, "These are the best cookies you've ever made"! 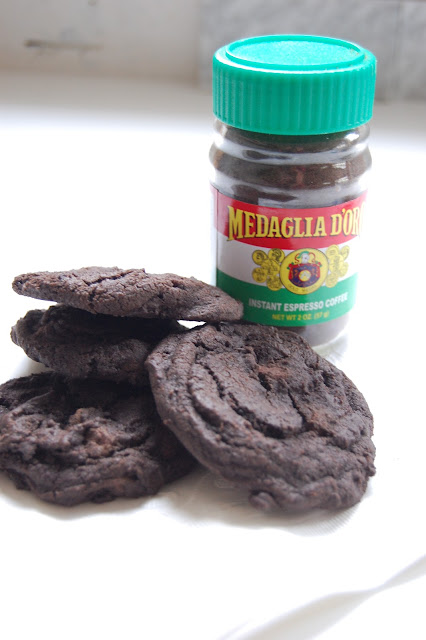 I've become quite well acquainted with Martha Stewart...Martha Stewart paint, that is!   I love Martha's paint colors, but,  unfortunately, Martha's paint won't be around for long.   According to our sources, Home Depot is phasing it out soon.
After much deliberation (I have a horrible time picking out the right paint color!),  MacGyver husband and I spent the New Year's weekend painting our existing cabinetry Martha's Sharkey Gray and Bedford Gray... 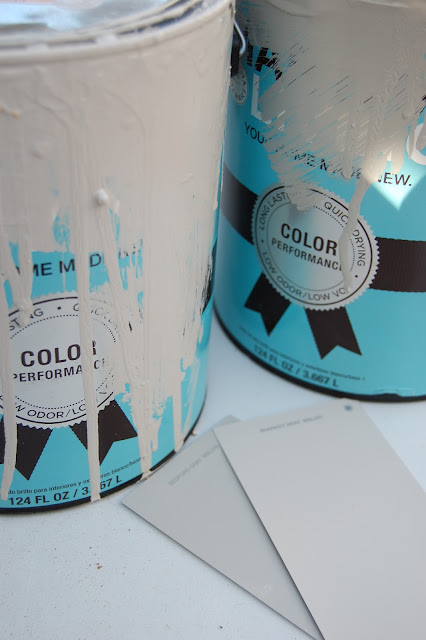 I'm probably the last one on the bandwagon, but I love gray cabinetry, especially after seeing Sally Wheat's kitchen on Cote De Texas... 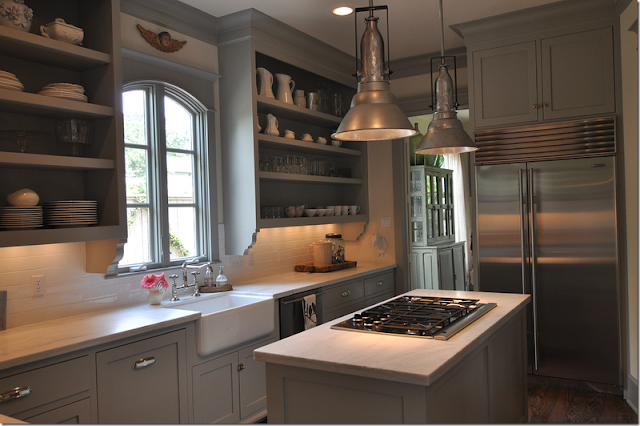 And, of course, Martha's gray kitchen...

I wish I had a lovely photo to show our version of gray cabinetry here at Love and Life at Leadora, but you'll have to stay tuned!   Also, the apron sink is in, the countertops are being installed Thursday, and the new light fixtures are on their way!  I am so excited!
Posted by Heather at 2:54 PM 20 comments

Heather
My name is Heather, and I enjoy crafting, sewing,baking,cooking and decorating. Along with my MacGyver husband and three kids, I live in a house originally built in the 1870s. My dream is to someday have a beautiful kitchen where I can cook and entertain friends and family effortlessly! In the meantime, come join me while I share stories and ideas about living in and renovating an old house.